…or, in other words, my renamed attempt of a six layer toffee torte to the reference above because, in the same fashion as an Olympic figure skater going for the triple sow cow but only hitting the double, I chickened out big time.  We can’t all be perfect on the first try, right?

Anyway, we attended our neighborhood supper club last night and I was in charge of bringing the dessert. It was our first time with this group of people and I wanted to make a good impression.  Hence, the six layer toffee torte was born.  This is not a torte for slouches!  It took me the better part of the day to make.  In fairness to the amount of time it took, I will say that I did give it a few extras to pretty it up.  Ok, on to the cake.  Here’s what you’ll need: 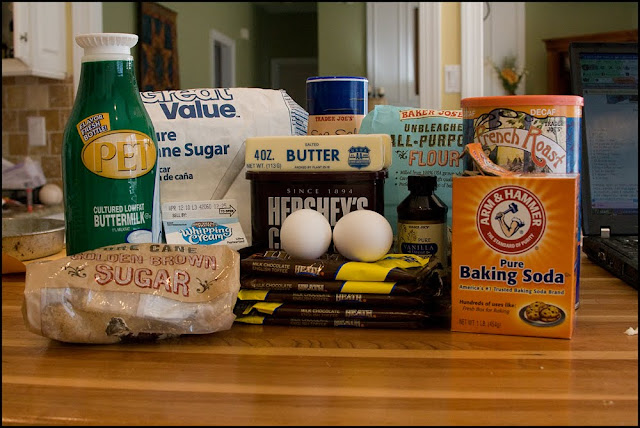 3 cups flour
2 1/3 cups sugar
1 cup + 3 Tbsp butter softened
1 1/3 cup buttermilk
1 cup cocoa
2 tsp vanilla
2 1/2 tsp baking soda
3 large eggs
1/4 tsp salt
1 1/3 cups hot coffee
2 cups whipping cream
3 Tbsp Brown Sugar
1 tsp coffee
3 king sized Heath Toffee Bars
1.  Preheat your oven to 350 degrees.
2.  Grease and flour three 9″ cake pans (if you have parchment paper around I highly recommend using it for this cake.  Grease your pan, place down your cut parchment paper and then grease the paper).
3.In a large bowl combine flour, sugar, butter, buttermilk, cocoa, vanilla, baking soda, eggs, and salt.
4. Beat slowly until just mixed and then add coffee to batter.  Increase speed and continue to beat for two more minutes until batter is smooth.  Pour batter evenly into pans.
5. Bake cakes for 25-30 minutes and then let cool for 10 minutes in the pans.  Remove cakes from pans and let them cool completely.
6. While the cakes are cooling chop up your 3 king sized Heath Bars.
7.  Place 1 tsp of cooled coffee in a mixing bowl.  Add to it two cups of heavy cream and three Tbsp of brown sugar.  Beat the cream until stiff peaks begin to form.
8. Cut your three cakes in half with a serrated knife to make your six layers (or, if you’re like me, just say no to scary slicing and leave it at three layers).
9. Place the first cake slice on your platter and spread a layer of the whipped cream over the top.  Sprinkle with toffee bits.  Repeat layers until all your slices have been added.  Here’s what you should have so far: 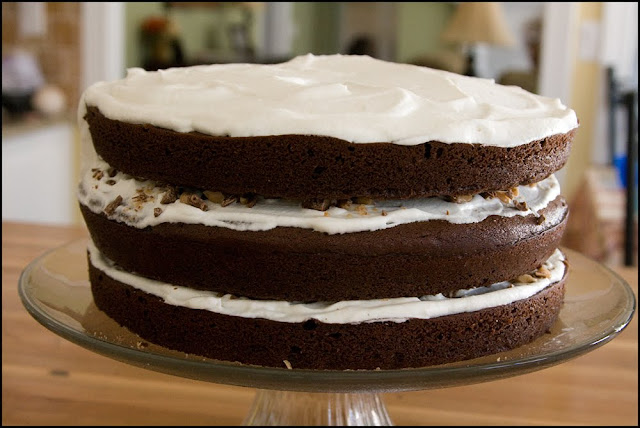 I left the toffee off the top in this picture because for the outside of the cake, I wanted it to be a finer cut than the chopped pieces I used on the inside.  So at this point I took the remaining chopped toffee and put it in a food processor.
You’ll finish off the cake by frosting the sides and then adding your finer chopped toffee to the outside.  And here’s the finished product: 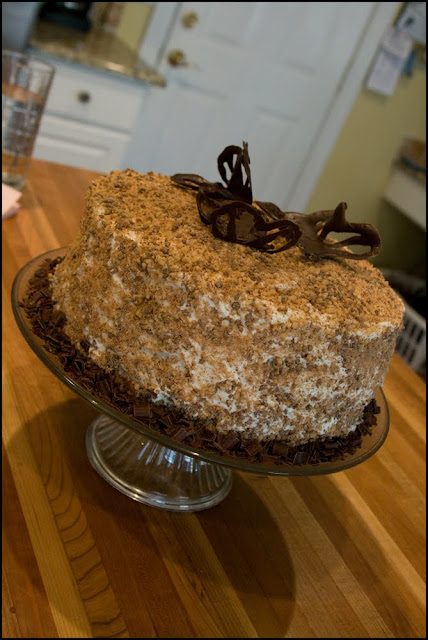 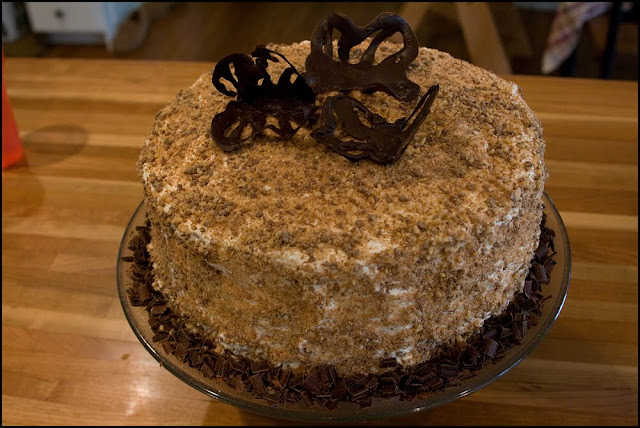 For the decoration, I used a dark chocolate bar.  The chocolate around the bottom is shavings that I created by running a potato peeler along the long edge of the bar.  The butterflies were made by taking a piece of waxed paper and drawing the butterfly with a marker, turning it over so the marker was on the bottom and hence not in the food, and then tracing the picture with piped chocolate.  Here are my drawings. Not pretty I’ll admit, but again, it was my first attempt and we’re talking chocolate here.  It’s hard to go wrong with that. 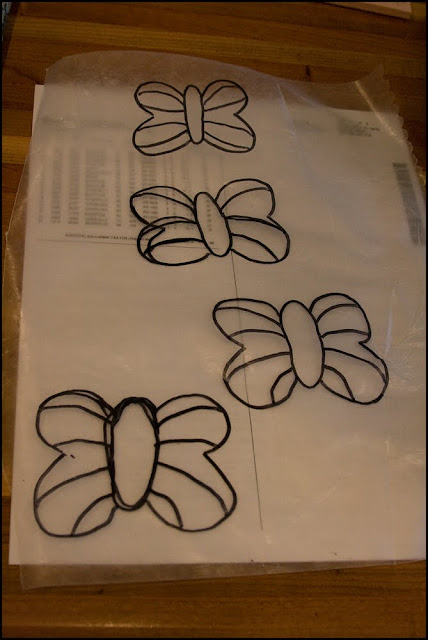 After getting the butterflies on the waxed paper, I placed them over the top of a muffin pan and gently pushed the center of the butterfly down so that they would have the appearance of flying.  Place them in the fridge for a couple minutes and Voila! So there you have it; Six Layer Toffee Torte turned short stack.  Enjoy!