Happy New Years!  Did everyone successfully bid the past 365 days adieu?…

END_OF_DOCUMENT_TOKEN_TO_BE_REPLACED

Arghh, I’m feeling  a bit of pirate in me this morning as I write this post.  It could be that this is a Caribbean inspired dish or it could be as simple as the fact that limey rhymes with the word blimey.  OR, most likely, it’s because I have three small boys who all love playing good guy bad guy in any form from Star Wars, to cops and robbers, to pirates.

This dish was delicious and I would definitely make it again.  My only disappointment was that I added in the half and half to my lime sauce when the temperature of the pan was still too hot, so the whole thing curdled kind of like the turkey on National Lampoons Christmas Vacation.  The taste was still delicious though, so I know it will work beautifully for you if you’re just a bit more conscious of your cooking temperature (or lack there of) when you go to add in your half and half.   Ok, so here’s what you’ll need: 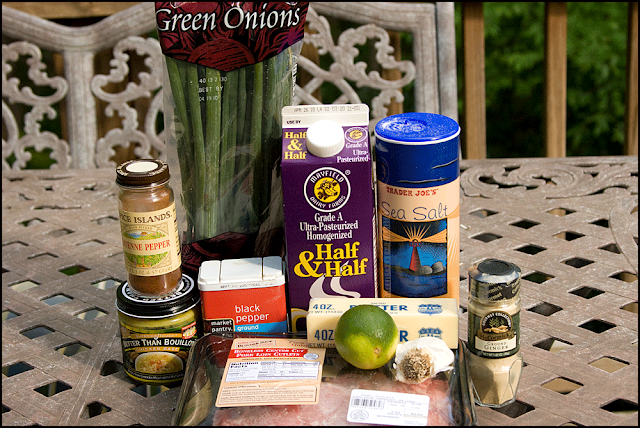 1 Pound of Pork Cutlets
1 Lime, Juiced
1 Tbsp of butter
1/2 Cup of chicken Broth
1 Green Onion, Chopped
2 Cloves of Garlic
1 tsp of Ginger (fresh or dried)
1/2 Cup of Half and Half
2 Tbsp of White Wine
1/4 tsp of Cayenne
Salt and Pepper to taste

Yep.  You guessed it, I forgot to add the white wine to the picture.  I’m not sure why I have such issues getting everything in the ingredient picture, but I’m thinking it’s because I get inspired part way through cooking and decide to add an extra ingredient I hadn’t originally thought of.  In any case, here’s a picture of the wine to make you all feel the complete ingredient list.  Feel it with me.  Now pour yourself a glass to help you get in the mood while you cook this masterpiece.

Now that we have everything we need, the first thing you’ll want to do it pound out your cutlets.  You already know how much I love pounding meat.  It’s a great aggression release AND it tenderizes your meat all in one.  Gotta love it.  You’ll want to pound them nice and skinny.  Place a piece of waxed paper on the top and bottom when you pound to eliminate splattering. 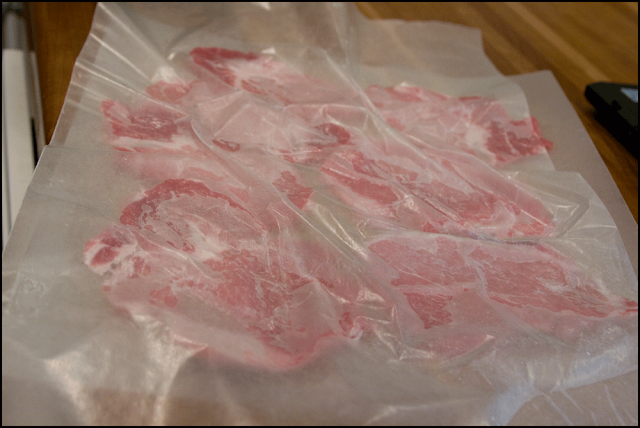 Once your meat is sufficiently pounded, go ahead and heat up your skillet on medium high heat.  Add in your butter and then cook your pork cutlets in the heated pan.  As you throw them in, sprinkle some salt and pepper on each side.  It should be about 2-3 minutes per side depending on how thin you pounded them.

Continue cooking your pork until all the cutlets are done.  Set them aside and keep them warm.  Now we’re going to move on to the sauce.  I’m sorry to say, I didn’t take any pictures of the sauce preparation.  I can’t say for sure why I did this, but I’m guessing it’s because I’m still a traumatized from my curdling incident.  Anyway, you’ll just have to trust what I tell ya here and go with me.  I promise it will taste delicious.

For the sauce, add your wine and lime juice to the pan and deglaze it on medium high heat.  Add your chicken broth, cayenne, green onions, and ginger and heat through.  Now, and this is important, turn your heat down to simmer and let your sauce temperature come down a bit.  While it’s settling down, stir it, to help it reduce and thicken.  Remove your sauce from the heat and add a small bit (1 to 2 tsps worth) to the half and half to help raise the temperature of the milk a bit. Next, pour in your half and half and whisk it vigorously for 1 to 2 minutes.  Hopefully it’s a beautifully creamy sauce at this point.  Add salt and pepper to taste. I haven’t tried again since my first biff, so if you try it, let me know if it worked better for you.

To plate the meal, I made some jasmine rice and laid a couple cutlets on top.  If my sauce would have been the way I hoped, I would have poured it over the top of the meat, but because it was less than pretty, I poured it over the rice so I had the flavor without you  having to see my curdled mess. We can’t get every meal perfect right?  Live and learn I always say.  I promise you though, despite it’s less than perfect appearance, it was still more than just a little delicious and definitely worth a “do-over” in the near future.

pound out the pork cutlets.

Add in the butter and cook the pork cutlets in a sauce pan on medium high heat. As you toss them in, sprinkle some salt and pepper on each side. It should be about 2-3 minutes per side depending on how thin you pounded them.

Add the wine and lime juice to the pan and deglaze it on medium high heat.

Turn your heat down to simmer and let your sauce temperature come down a bit.

Remove sauce from the heat and add a small bit (1 to 2 tsps worth) to the half & half to help raise the temperature of the milk a bit.

Pour in the half and half and whisk it vigorously for 1 to 2 minutes.

Add salt and pepper to taste.