The May 2010 Daring Bakers’ challenge was hosted by Cat of Little Miss Cupcake. Cat challenged everyone to make a piece montée, or croquembouche, based on recipes from Peter Kump’s Baking School in Manhattan and Nick Malgieri.

So unless your a serious baker, I’m guessing you read this post and thought a croquem-what?  I know I did.  I had never heard of a croquembouche before this challenge, but I will definitely be making another one after!  If you’ve ever had a profiterole (or a cream puff as we Americans typically call them), then you’ll understand that a croquembouche is really just a big tall pile of cream puffs stacked on top of each other with some hard caramel in the mix that helps to hold the whole shebang together.  Being that croquembouche is a traditional wedding cake in France, you can imagine that some of them can get pretty elaborate!
I have to admit, when I first read this was the challenge, I was a tad bit nervous despite my love for cream puffs.  I love to bake, but will admit that I don’t understand all the science behind successful pastry.  I was terrified of a flop.  And my first attempt at this actually was a flop.  It was rather pitiful really.  I pulled them out of the oven and they flattened right before my eyes.  Not to be outdone, I threw the kids in the car and headed off to the grocery store for more eggs to try a second batch.  I wasn’t going to give up that easy.  And I’m glad I did.  My second attempt was much much better and turned out perfect!
Lessons learned from the first failure.  1.  Keep ’em small.  The first attempt my puffs were much larger and I think that might have contributed to them falling.  2. And this is the most important – cook those puffs until they’re good and dried out!  Lower the temperature a bit if you have to after the initial high temperature cook, but don’t, whatever you do, pull them out too soon.  And try not to open the oven until you’re good and ready to take them out.  They need to stay at a warm temperature to rise and if you let the hot air out of the oven, you’ll risk letting it out of the puff too.
Ok, I’m ready to start if you are.  Without further ado, croquembouche.

Optional:  1 Egg Slightly Beaten for an Egg Wash
Preheat your oven to 425 degrees.  While your oven is preheating, combine your water, salt, sugar and butter in a saucepan over medium heat.  Bring the ingredients to a boil, stirring occasionally.

Once your mixture begins to boil, remove your pan from the heat and sift in the flour, stirring to combine completely.

Return your mixture to the heat and cook it, stirring constantly until the batter begins to dry slightly and pull away from the sides of the pan.  When this happens, remove your batter from the pan and place it in a bowl.  Stir with a wooden spoon for one minute to cool it slightly.

Now, add your first egg and stir it in.  The batter will appear loose and shiny.  I had it somewhat clump in mine as well, but they went away with continued stirring.  Continue to add in your eggs, one at a time, stirring completely with each addition. 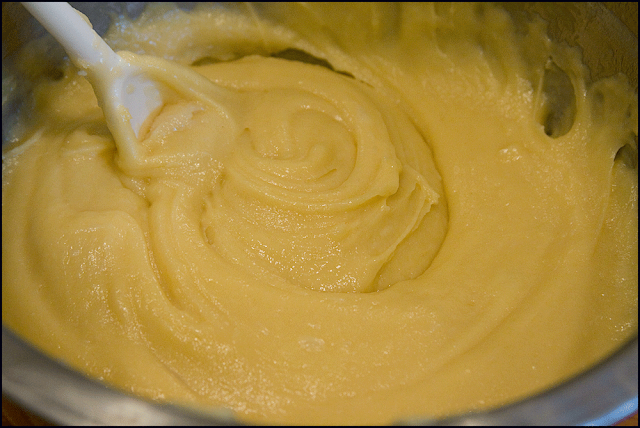 Once all your eggs are added, transfer the mixture to a piping bag and pipe the choux onto your baking sheets. 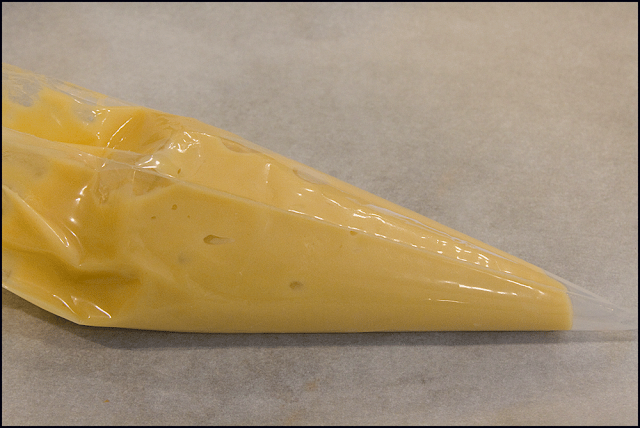 I used a piping tool as well (although it’s not on in that picture), but you can just cut a small tip off the end of the bag as well.  They should be about 1 inch high and 1 inch wide.

At this point you can brush the tops of them with egg white if you so desire.  I did that the first time and mine seemed to burn a bit easier with it on, so I left it off the second try and they turned out just fine without it.
Throw your puffs into the oven at 425 degrees for about 10 minutes.  Your pastry should be puffed and starting to turn a light golden color.  Turn your oven down to 350 and cook them for an additional 20 minutes or until they are completely dried out.  If you need to turn your oven down a notch to keep them from burning, feel free to do so.  Just don’t open the oven or take them out until they’re done!  And here’s mine fresh out of the oven.  You can see how much bigger my first attempt was on the parchment. 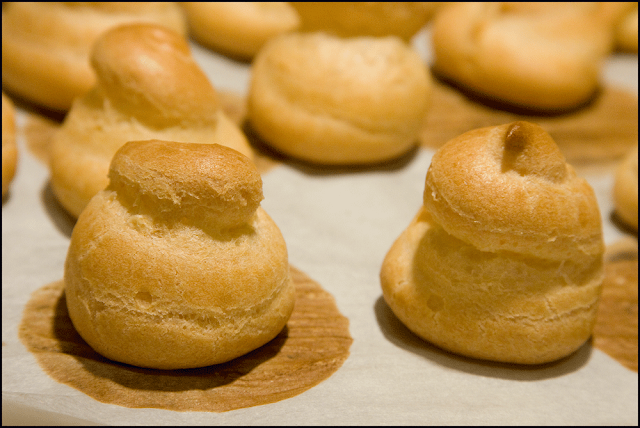 Yes!  I can make puff pastry!  But can I fill it?  Let’s see.  I made both vanilla and chocolate filling.  Here’s what you’ll need for a half batch.  I made a half batch of each and pretty much used it all up with the exception of a few extra tablespoons of each.

For the Custard:
1 Cup of Whole Milk
2 Tbsp of Corn Starch
6 Tbsp of Sugar
1 Large Egg
2 Large Egg Yolks
2 Tbsp of Butter
1 tsp of Vanilla
For Chocolate custard, add 3 Oz. of semisweet chocolate
Begin by dissolving the cornstarch in 1/4 cup of your milk.  Combine the remaining milk in a saucepan with the sugar and bring to a boil.  When the mixture starts to boil remove it from the heat.

Beat the whole egg and then the two egg yolks into the cornstarch mixture. 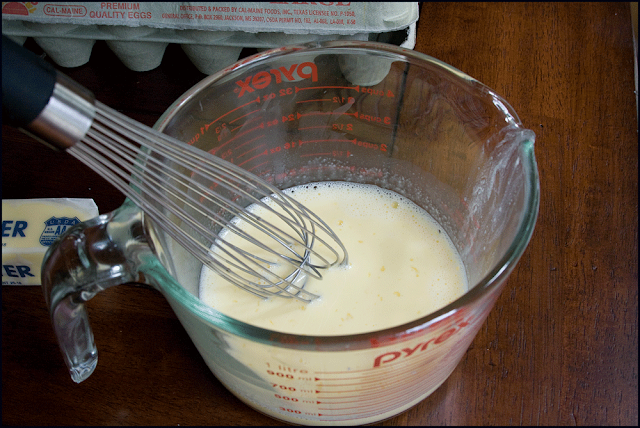 Now, pour 1/3 of your boiling milk into the egg mixture and whisk it constantly so that the egg doesn’t begin to cook.  Return your remaining milk to a boil.  Slowly add the egg/milk mixture into your pan in a stream whisking constantly so as to not cook the egg.  Continue whisking constantly until your custard begins to boil and get thick.   Doesn’t it look yummy? 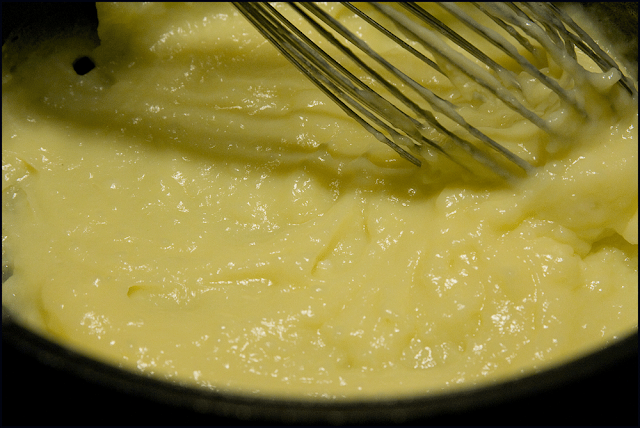 Remove the custard from the heat and add in your butter and vanilla.  Transfer the custard to a ceramic/metal bowl, cover with plastic wrap and refrigerate immediately until you are ready to use.


For the chocolate pastry cream, bring ¼ cup of milk to a boil in a small pan.  Remove it from the heat and add in 3 ounces of semisweet chocolate, finely chopped, and mix until smooth. Whisk it into your pastry cream when you add the butter and vanilla.


Just a note that I made both the custard and the choux a day before I was ready to assemble.  The custard needs at least 6 hours to fully cool and the choux can be stored in an airtight container overnight.  Don’t assemble the croquembouche until just before you’re ready to eat it because it won’t last more than a handful of hours in the beautiful condition it starts in when you finish it.  I finished mine and we ate every last little puff within three and a half hours of completion.


Ok, time for assembly.  The first thing you’re going to want to do is fill your cream puffs with the custard.  Grab your bowl of custard and spoon it into your piping bag.  I fitted mine with a Wilton tip #4.  I realize that’s a bit tiny, but so were the cream puffs, so I didn’t want to overdo it.  You could probably use a size higher if you desired.  Stick the end of the tip in the bottom of the cream puff and fill ‘er up.  This took a few puffs for me to get the hang of what was filled, not quite filled, and a touch too filled.  Here’s the bottom of one of the cream puffs.  You can see where I stuck the piping tip in.

Once you’ve finished piping all the cream puffs, it’s time to make the hard caramel.  A quick word of warning.  Hard caramel burns like no one’s business.  It’s hot as Hades and if it gets on your skin it will immediately form a flesh eating crust.  So take heed and be careful when working with hot sugar.  Ok, now that I’ve put that disclaimer out there, here’s what you’ll need for the hard caramel.


Yep, that’s it.  Easy peasy.  Combine your sugar and lemon juice in a saucepan and stir it up until the sugar resembles wet sand. Place it on medium heat without stirring until the sugar starts to melt around the sides of the pan and the center begins to smoke. Begin to stir the sugar. Continue heating it, stirring occasionally until the sugar is a clear, amber color.  When it hits the desired color, turn it all the way down to simmer and get ready to do some serious puff dipping.  Here’s my sugar going from white to amber. 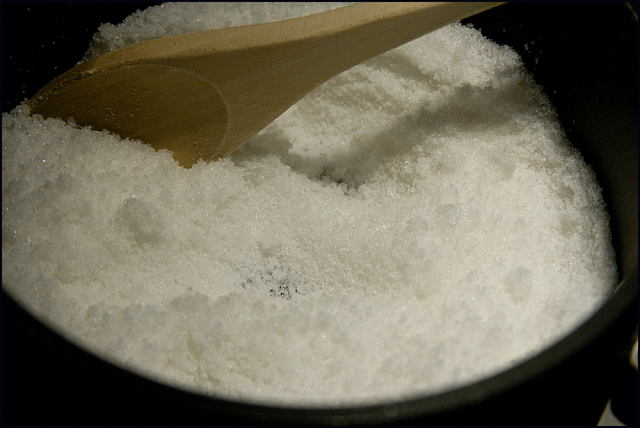 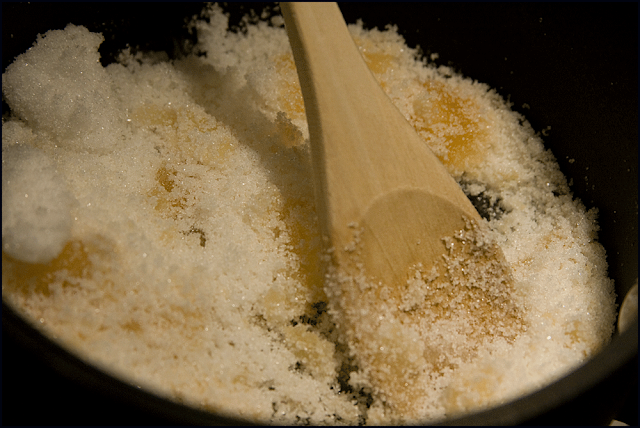 Alright.  Your puffs are stuffed and your caramel is ready.  You can stack your croquembouche any number of ways.  Just run a search in google to get some ideas.  I bought a cone from Michaels and used that to build around.
If you’re using a cone, place it in the center of your serving plate.  Grab your first puff and dip the top into the hot sugar being careful not to burn your hands.  Place it on your plate up against the cone.  Grab a second puff and dip the bottom of the puff in and then stick it on top of your first.  Continue building your bottom layer all the way around.

Now, from here on out, you’ll continue to dip the bottoms of your puffs and layer them around, building up the cone until you use all your puffs up.  I had the small problem of not having enough puffs to reach the top of the cone so I simply cut the extra portion of the cone off and used one of my flat first batch puffs to cover it up.  Here it is all built up.  I also used some of my extra sugar as decoration, spritzing it around the outside of the croquembouche.  Several people who participated in this challenge did some really neat sugar art.  Unfortunately for me with three kids running around, a babysitter on the way and a supper club to attend, I didn’t have time for anything fancier than what I did with it.  It is what it is. 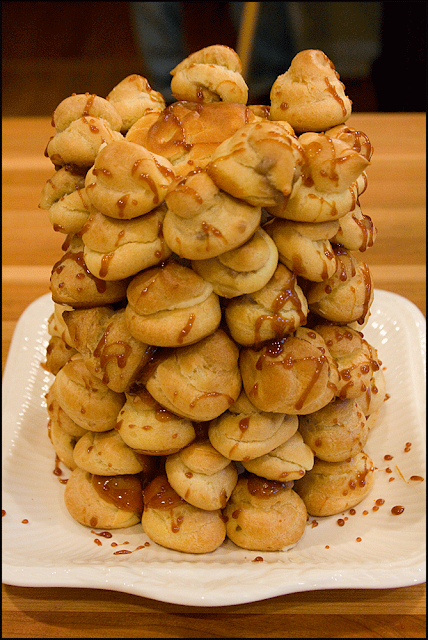 I did, however gussy it up with some ribbon and fresh flowers and I do have to say, that I thought it was one of the prettiest desserts I’d ever created.  Here is the final product.  I’m pretty proud of what I put together.  I actually created a croquembouche that looked pretty and tasted amazing.  Isn’t it beautiful? 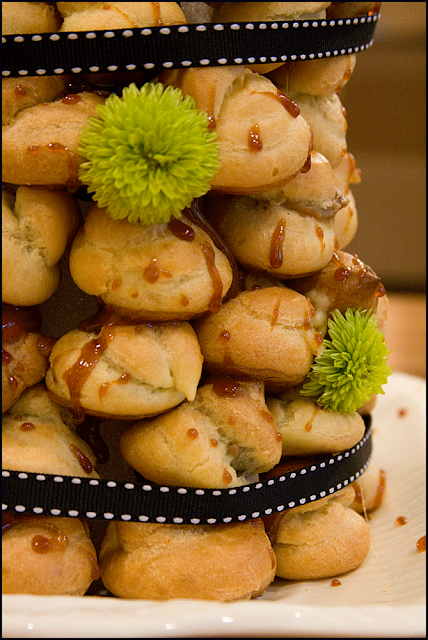 Grab a Copy of the Recipe HERE