Just a note to let you all know that Beyond the Basics was bumped this week for a Daring Bakers Challenge but will be returning next Tuesday on schedule.  I promise you, this cake is worth the bump.

The July 2010 Daring Bakers’ challenge was hosted by Sunita of Sunita’s world – life and food. Sunita challenged everyone to make an ice-cream filled Swiss roll that’s then used to make a bombe with hot fudge. Her recipe is based on an ice cream cake recipe from Taste of Home.

Homemade ice cream meets homemade swiss roll cake meets homemade fudge.  What could possibly be better?  Honestly, not much.  This treat tickled every taste bud in my mouth while simultaneously cooling my insides down in a most pleasurable manner. I loved how I could taste each individual flavor while at the same time relishing their combined essence as they melded (or maybe I should say melted) together beautifully into one.

Or in other words, you MUST make this cake.  I know I say this every time I do one of these, but this was definitely one of my favorite challenges!  The Swiss roll cake was especially delicious and could have easily been served on it‘s own with a swirl of strawberry puree and a smattering of fudge to dip in. 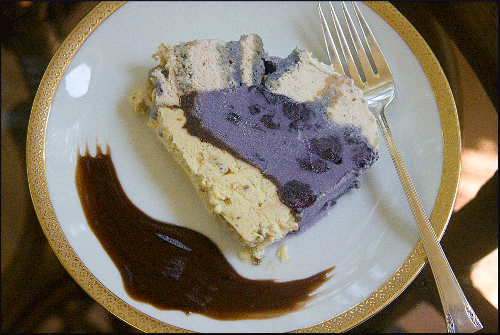 My only regret during the process was that I didn’t freeze the bombe (another word for this beauty) long enough between layers and the blueberry ice cream melted through the cake a bit and turned it purple.  Aside from the bleeding color though, this challenge was definitely a Mommie Cooks success!   I know you’ve got to be craving a piece by now so let’s get this Swiss cake rolling!

I’m going to take this in steps.  We’ll start with the blueberry ice cream first.  I chose to make this flavor for the first ice cream choice because I had a leftover bucket of blueberry puree I hadn’t done away with yet from my unsuccessful attempts at blueberry cheesecake ice cream (it tastes delicious but won’t freeze well).  Here’s what you’ll need to put it together: 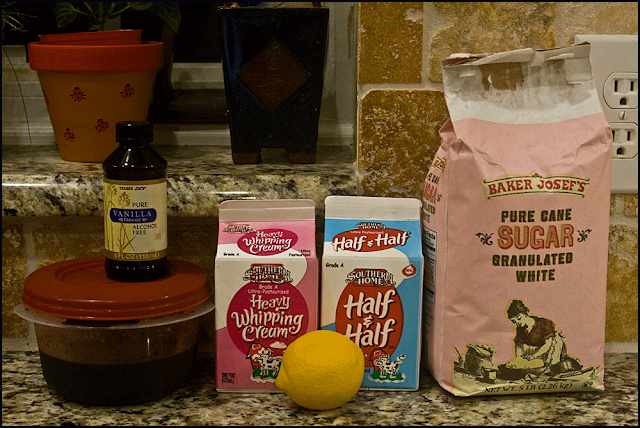 1 Cup of Blueberry Sauce
2 Cups of Heavy Cream
1 Cup of Half and Half
1 tsp of Vanilla
1/2 tsp of Lemon Juice
1 Cup of Sugar
To make the blueberry sauce you’ll need:
1 Pint of Blueberries
1 Cup of Water
1 tsp of Lemon Juice
1/2 Cup of Sugar
First up you’ll need to whip up a batch of the blueberry sauce.  To do this you’ll throw in a saucepan your blueberries, water, lemon juice and sugar. 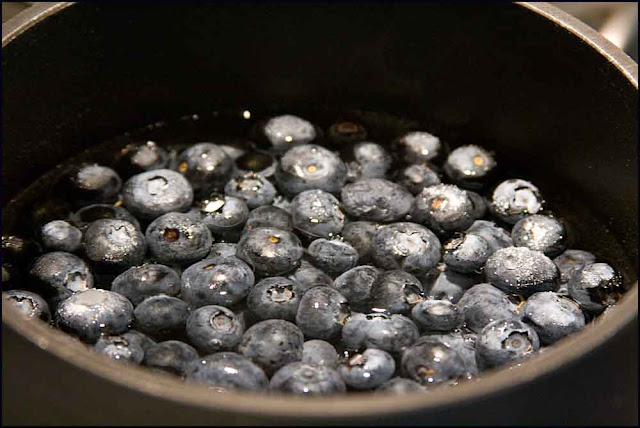 Heat the mixture up to boiling and then turn it back down and let it cook until thickened; about 10 minutes. 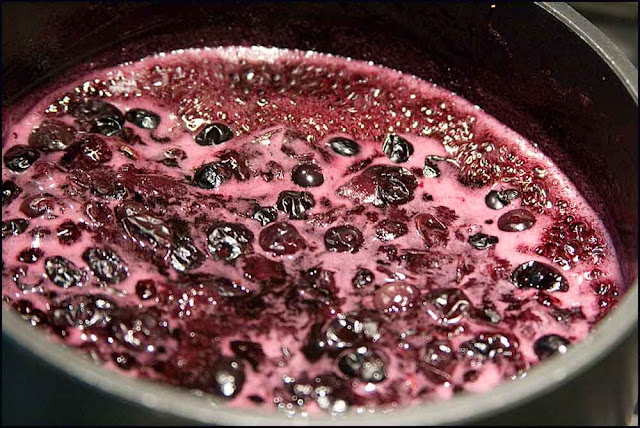 Put it in the fridge and allow it to fully cool.  You can strain the berries out if you prefer, but I like to see the blue beauties in my ice cream so I leave them in.
Once your berry sauce is cooled, mix it together along with the other ingredients above and throw it into your ice cream maker.

Stick the ice cream in the freezer and allow it to freeze completely.
Next up, we’ll make the pistachio ice cream.  This ice cream, in my opinion, was simply awesome.  I loved the flavor of it; refined yet delicious.
I felt a little less lazy when putting this one together (it helps when I’m not assembling at 9:30 at night) so I made a custard ice cream using eggs.  The recipe I used is adapted from Emeril Lagasse’s Pistachio Ice Cream.
I did use pistachio extract in this recipe which definitely makes the flavor but which may be hard to find. If you have a specialty grocery store, see if you can track it down there.  If you can’t find it, don’t panic, just up your almond extract addition to 1 teaspoon. 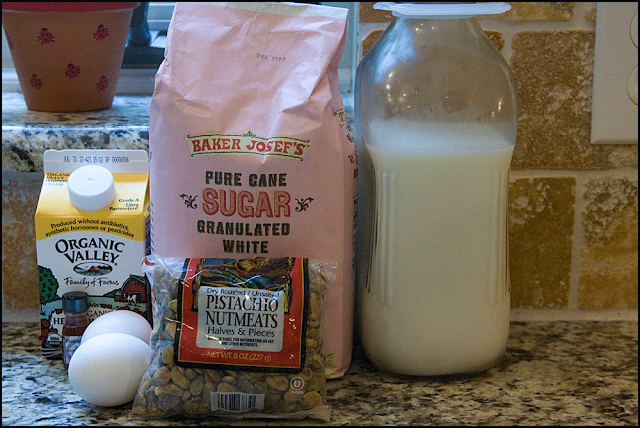 1/2 Cup of Unsalted Pistachios
1/2 Cup of Sugar
1 Cup of Milk
11/2 Cups of Heavy Cream
6 Egg Yolks
1/2 tsp of Pistachio Flavor
1/2 tsp of Almond Extract
Grab your pistachios and 1/4 cup of your sugar and roll them around in your food processor until finely ground. 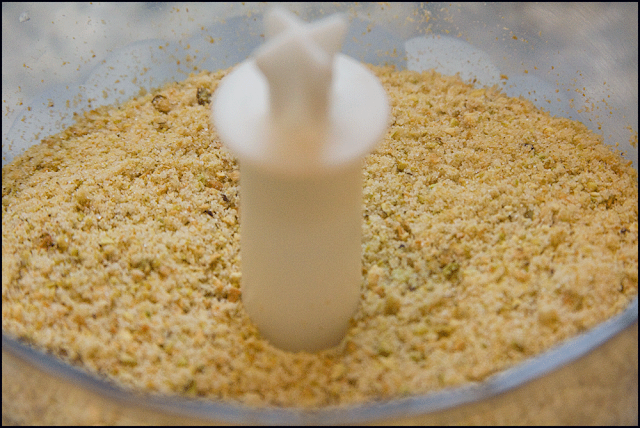 Next up, throw your 6 egg yolks in a bowl with the remaining 1/4 cup of sugar and whisk them together.
And while we’re on the topic of eggs, I bought a 12 pack of free range eggs when I was at the health food store; mainly because I was too lazy to make a second stop at the regular grocery store to save the extra $2.00.
I was curious to see if I could tell the difference between a typical store bought egg and a free range egg.  I think the results speak for themselves.  I’ve read that free range eggs have a much richer, darker yellow yolk.  Can you tell which one is the free range egg? 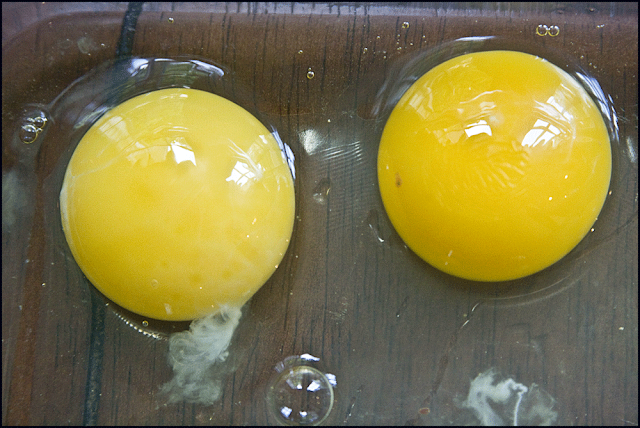 Grab a sauce pan and heat up your milk and cream to boiling and then remove from heat.  Measure out 1/2 cup of the heated milk and slowly pour it into your egg mixture whisking constantly. 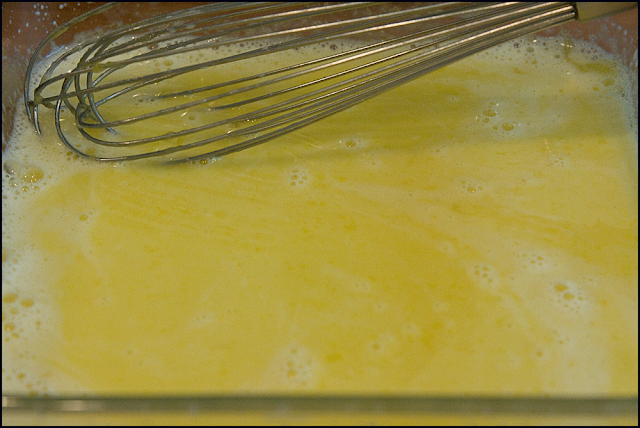 Now turn your heat back on low for the milk, take your egg mixture and slowly add it to the milk continuing to whisk constantly.  Continue to cook the mixture on low heat, whisking occasionally, until the mixture begins to thicken; about 6 minutes. 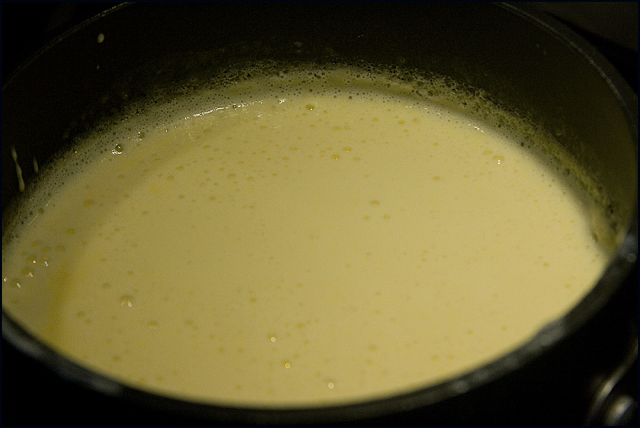 Remove the mixture from the heat and add in the pistachio flavor, almond extract, and chopped pistachios. 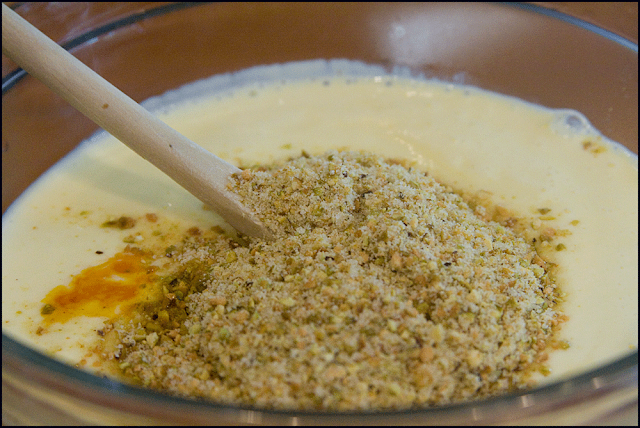 Combine it all together and allow it to cool completely in the fridge.  Once it’s cooled, put it into your ice cream maker and let er freeze up.  Throw it in the freezer until completely chilled.

Alright, moving on to the fudge sauce. 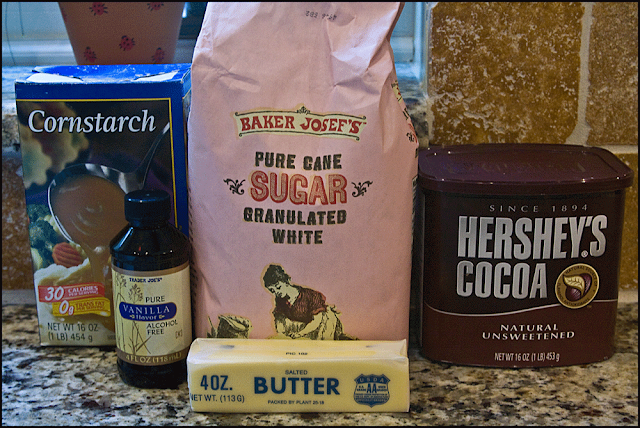 1 Cup of Sugar
3 Tbsp of Cocoa Powder
2 Tbsp of Corn Starch
11/2 Cups of Water
1 Tbsp of Butter
1 tsp of Vanilla Extract
Grab your sauce pan and mix together your sugar, cocoa powder, corn starch, and water.  Heat it up over medium high heat and stir it up until the mixture thickens and becomes smooth.

Remove the mixture from the heat and stir in the butter and vanilla.

Place your fudge sauce into the fridge and allow it to cool completely.
Last but not least, let’s put together our Swiss cake roll. 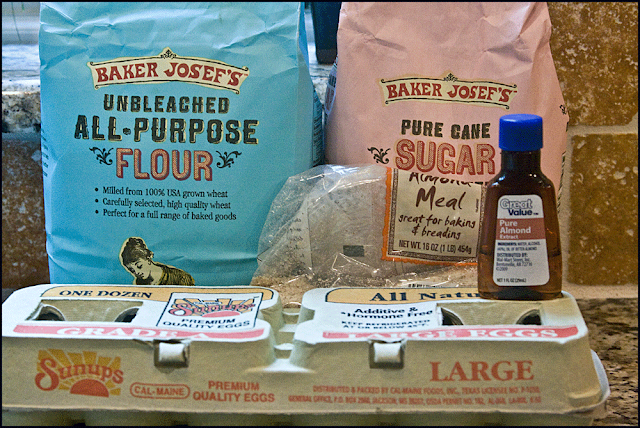 For the Cake
6 Eggs
11/2 Cups of Caster Sugar
6 Tbsp of Flour
5 Tbsp of Almond Meal
2 Tbsp of Boiling Water
For the Strawberry Cream
2 Cups of Whipping Cream
1 Vanilla Bean
5 Tbsp of Sugar
1/2 Cup of Strawberry Puree
First up, I had every intention of adding the almond extract, but completely forgot to do it.  Hey, it happens.  It was perfectly delicious without it, but feel free to add it in if you feel so inclined.
Second, in case you’re wondering what caster sugar is and where you find it, it’s simply a finer grain of sugar from the common form you typically buy at the grocery store.  If you can’t find it or, like me, are too lazy to even attempt to try and find it, you can simply throw the cup and a half in a food processor and grind it up. 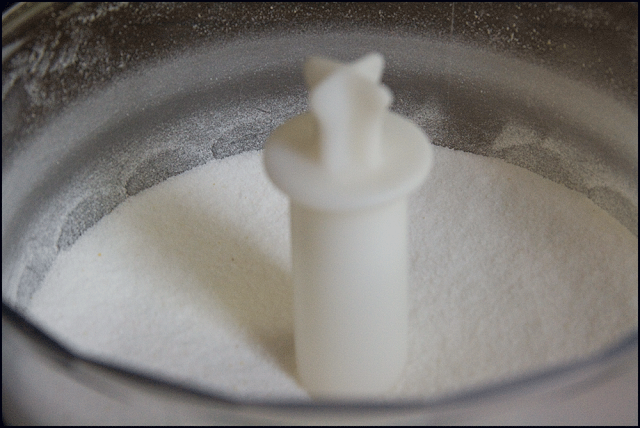 Grab your eggs and sugar and add it to your mixing bowl.  Mix it up until it’s very thick.  There should be a trail left behind when your beaters are lifted that should remain for about 10 seconds.  It took a good 8 to 10 minutes of beating to get there for me. 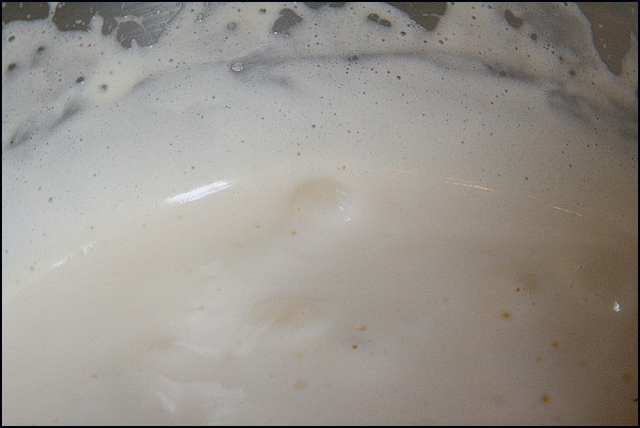 In a separate bowl mix together the flour and the almond meal. 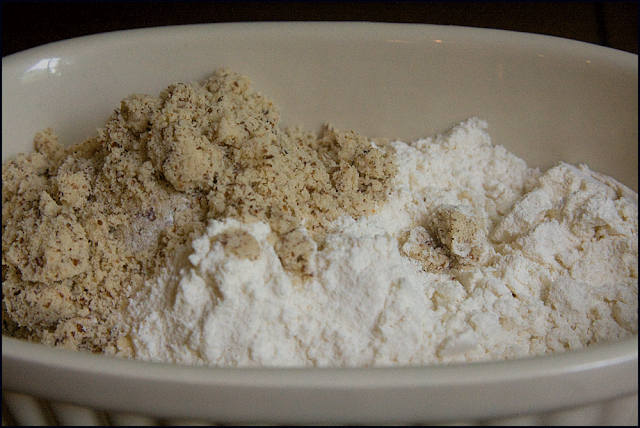 Add the flour mixture in three separate batches to the egg mixture and fold in very gently until just mixed. 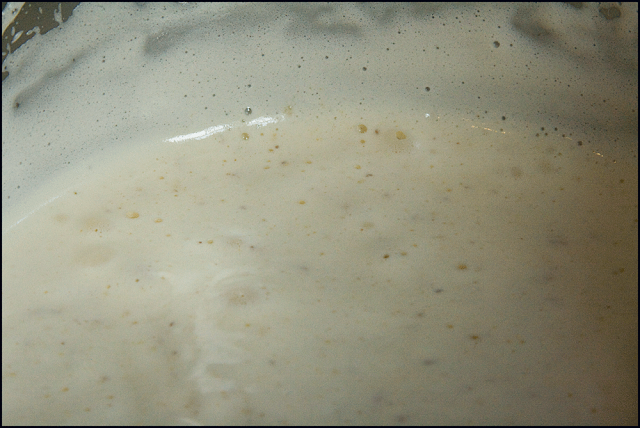 Pour half the mixture into each jelly roll pan and spread it out. 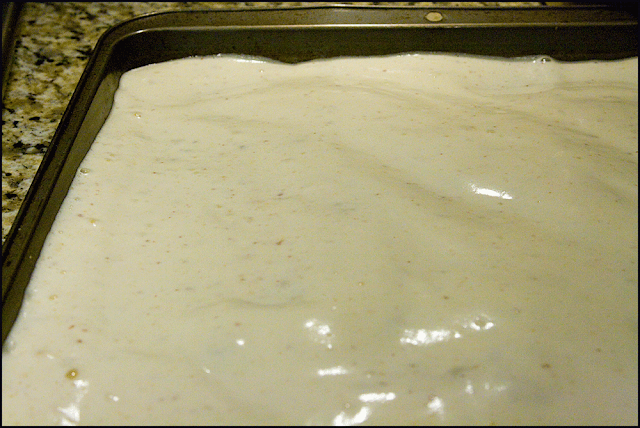 Place it into the oven at 400 degrees and cook it for about 9 to 10 minutes or until the edges are golden brown and the center is springy.  While the cake is cooking, lay out a dish towel and sprinkle some of your caster sugar over the top of it.  You can see my first cake rolled up on the right side. 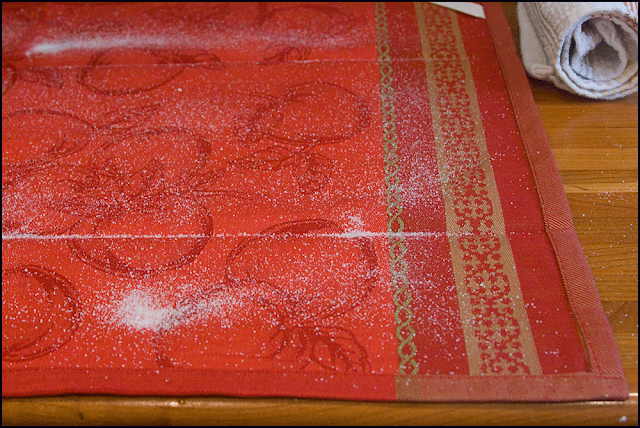 When your cake comes out of the oven, turn it out onto your dish towel, still hot.  Cut off any crispy edges from the cake.  Now, fold the top portion of your dish towel over the edge of the cake. 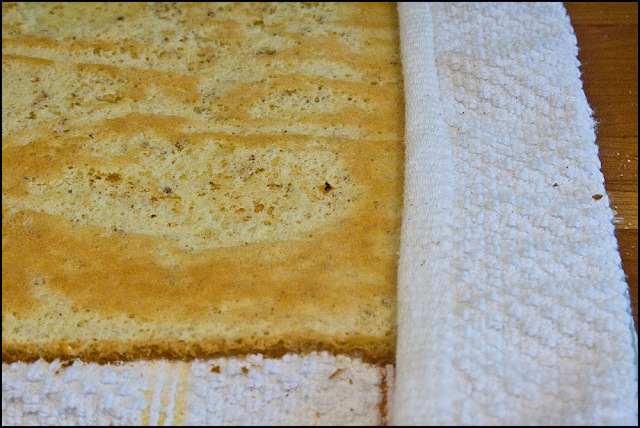 Now, starting at the toweled end, roll your cake up in the towel and allow it to cool in the towel.  Repeat the same for your second cake.

While the cakes are cooling, it’s time to whip up your strawberry cream.  In your food processor, grind up your sugar and vanilla bean.  If you don’t have a vanilla bean, you can substitute one tsp of vanilla.  Simply add it to the cream before whipping. 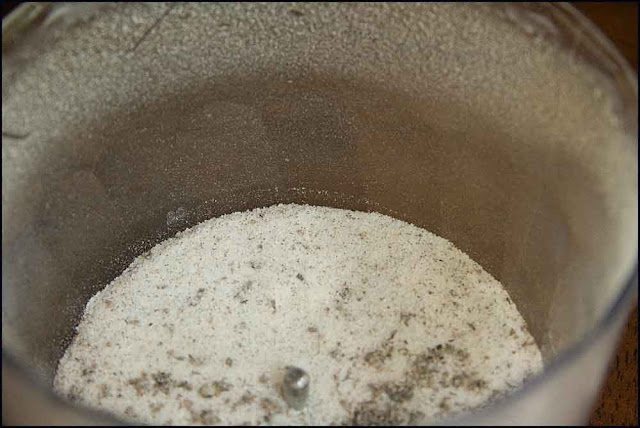 Throw in your mixer the heavy cream and sugar/vanilla.  Whip it up until you have whipped cream.  Now add your strawberry puree and gently fold it in.

Now you’re going to open up your cooled cakes and spread the yummy cream mixture on the two cakes leaving a 1/2″ border around the cake. 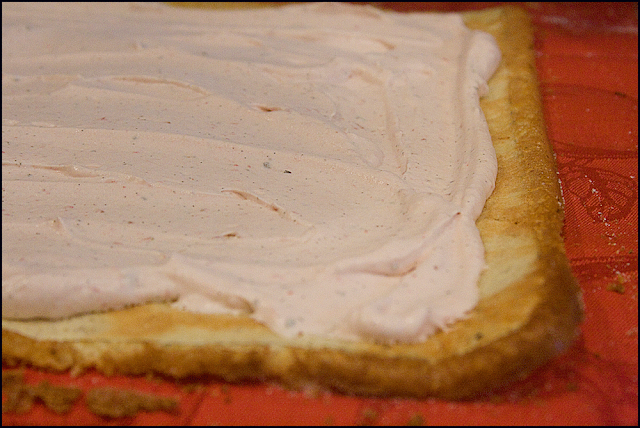 Gently roll your cakes back up again.  Here’s where we’re at:

Wrap your cakes up in plastic wrap and store them in the fridge until you’re ready to assemble the bombe.


And by golly, we are ready to assemble, so let’s get to it.  The first thing you want to do is line a large bowl with plastic wrap. 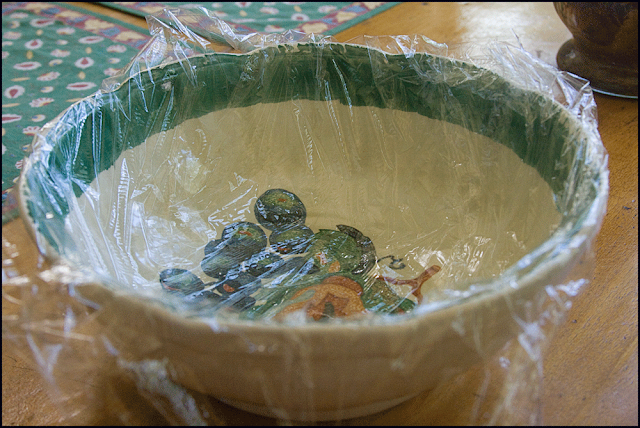 Now, grab your roll cake and slice it into one inch slices.  Line your bowl with the slices.  How pretty is it already!? 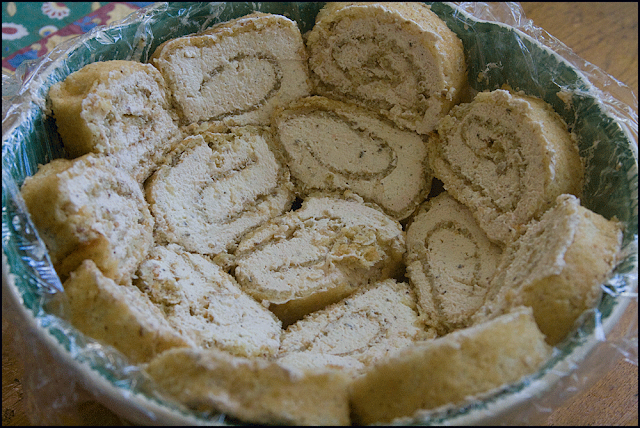 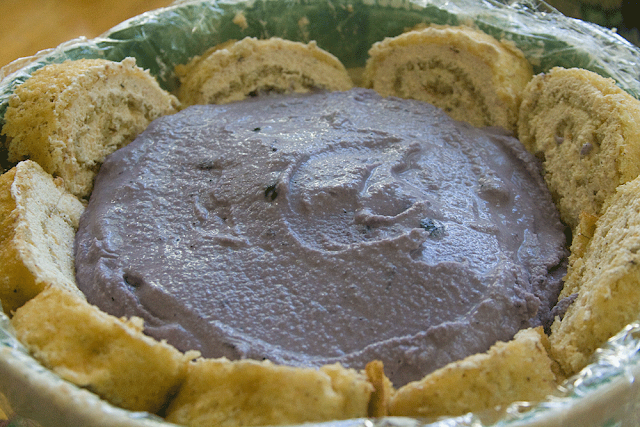 Put the bowl back in the freezer for another 2 to 3 hours and let it freeze completely.
When you’re ready for the fudge layer, pull the bowl back out and pour your fudge over the top of the ice cream.

Put the cake back in the freezer and give it another 2 to 3 hours to completely freeze.
Finally, when you’re ready to add the second ice cream, go ahead and pull it out to soften a bit.  When the ice cream is soft enough to spread, pull your bowl out one last time and add the second layer of ice cream on top of the fudge. 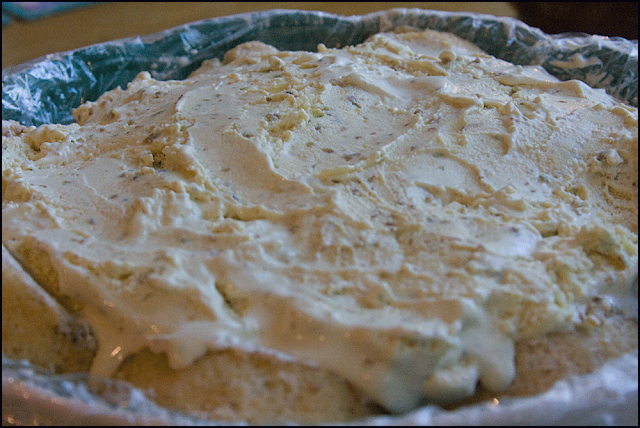 Can you guess the next step?  Yep, you guessed right, put it back in the freezer and let it freeze completely.  My recommendation is to let it freeze overnight before you serve it up.
When you’re ready to serve it, you’ll pull it out of the freezer, grab a serving plate and turn it out.  With the plastic wrap in the bowl it should just drop out.
And, are you ready for this?  Here, my friends is what we have been working towards; the final bombe.  The blueberry ice cream did leak a bit through, but it was still fairly pretty and the taste was spectacular. 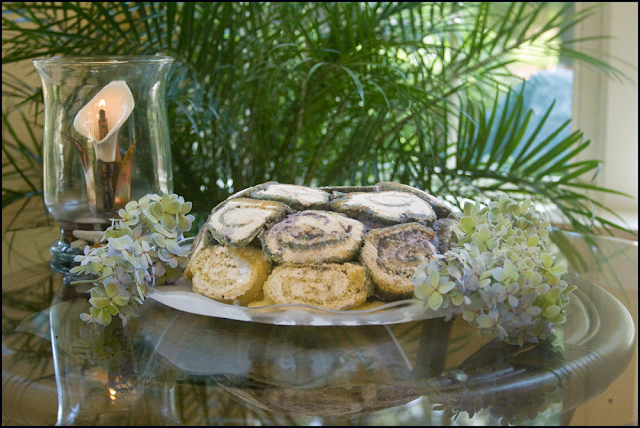 And just look at the beautiful layers on the inside!  Isn’t it elegant? 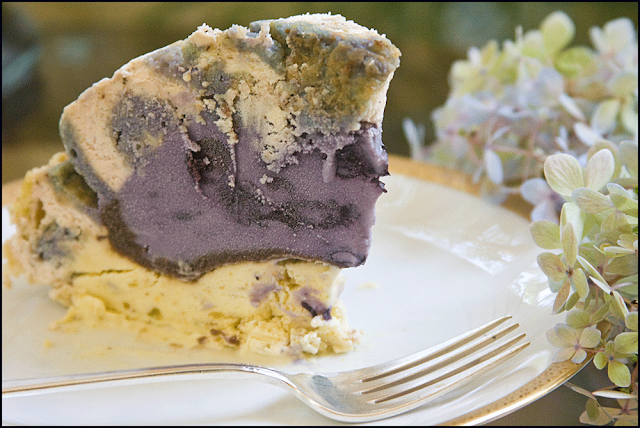 Let’s get this Swiss Cake Rolling!