The boys and I came home from the bookstore on Thursday to find this sitting on the doorstep: 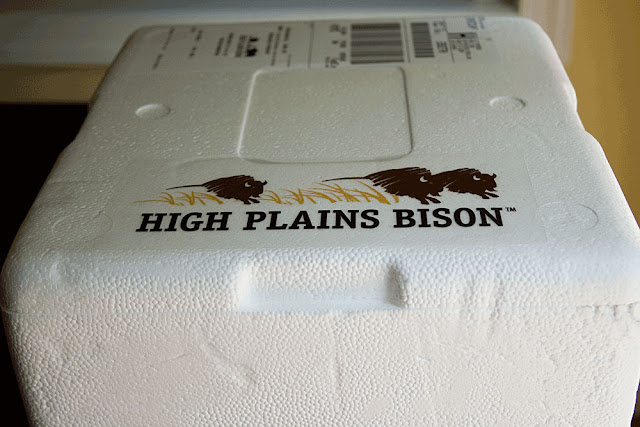 I was recently asked to try out some of High Plain’s Bison meat.  It’s been well over a year since I regularly ate red meat (the treatment and feed that cows are given has really turned me away), but High Plains boasts that their bison are free range, grass fed, and all natural so I thought I might give it a shot and see if I could tell the difference from conventionally raised cows.

The verdict is, not only could I tell the difference, but it was so much better that I don’t think I’ll ever need to turn to cow meat again!  To top it off, bison is healthier than most of the other meat choices out there.  It’s leaner, lower in fat, and higher in iron than chicken.  Who would have thunk it?

Here’s what High Plains sent me: 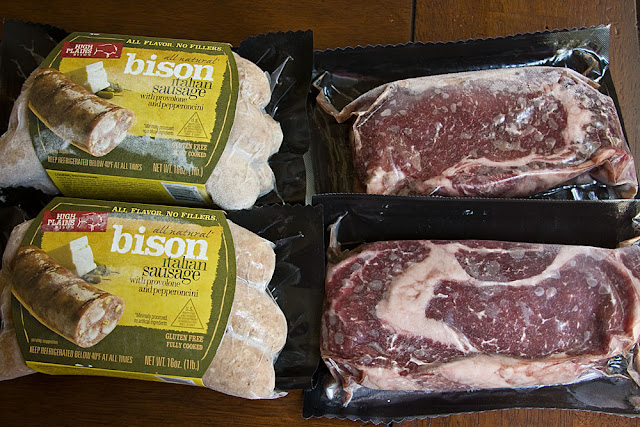 If you’ve been following me for a while, then you know that I absolutely adore sausage.  And this was no ordinary sausage either.  They filled it with honest to goodness real provolone cheese and pepperocinis. Just wait until you see how delicious the inside of these sausages were.  I can hardly contain myself just thinking about it!

The second cut of meat was a bison rib-eye.  Scott was in heaven when he saw these.  I’m not a big steak fan, but he would eat it every night if he could.  I wanted something simple yet tasty to try these so we could really take in the flavor of the bison.  I took a look at the recipes on High Plains Bison’s website and decided we’d try their recipe for Grilled Bison Ribeye Steak.

I’m going to save the results of this recipe for next week as I already have a chocked full blogging schedule to share here this week.  Tomorrow we’ll be examining the science behind a sponge cake with Beyond the Basics and the rest of the week we’ll be celebrating Indian Cuisine with a three day recipe posting series resulting in a full on vegetarian feast.  Sounds pretty good, huh?

So let’s start with the sausage.  As soon as a I opened the box and saw those little jewels, the first thing that came to my mind was a dish of sausage, onions and peppers.  You know you want some!  Here’s what you’ll need:

Start out by throwing a tablespoon of oil into your saute pan and cooking up your sausages on medium high heat until heated through.  You can also grill up your sausages.

Seeing as I am a new found grill master, I had every intention of taking this direction.  Unfortunately, mother nature and my husband, who had forgotten to clean the grill from his last cooking adventure, had different plans.  Before I could even get the meat on the coals, my dirty grill set fire to itself sending large toxic black plumes of smoke into the atmosphere and then five minutes later the heavens opened up, as if to retaliate on my air pollution, and dumped a pile of rain on my parade.   A little embarrassing to say the least, but all’s well that end’s well.

Anyway, I digress.  Once your sausages are thoroughly heated through, pull them off the heat and set them aside.  Here’s mine.  I even added a sprig of basil to attempt to make them pretty for you, because that’s the kind of gal I am. 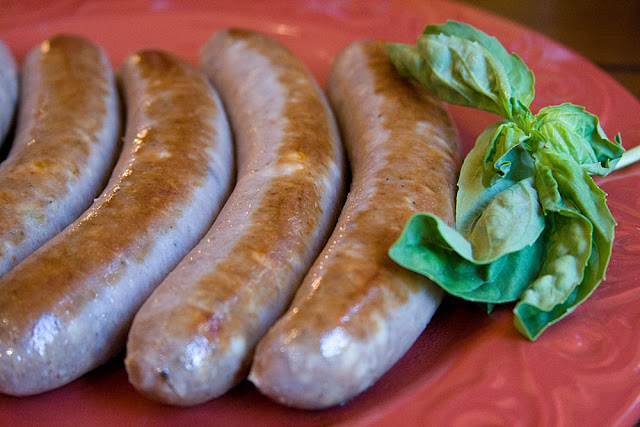 At the same temperature and in the same saute pan  you cooked the sausages in, throw in your garlic, onions and peppers and cook them up for about 4 to 5 minutes.  You can use any combination of onions.  I had a red onion to use up so I used one red and one white. 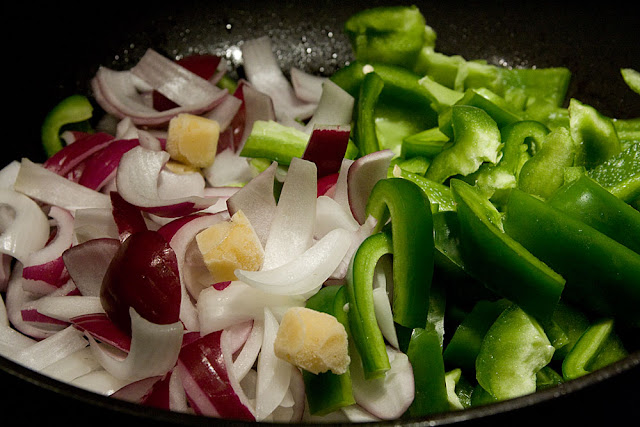 After your veggies have had about 4 to 5 minutes of cooking time, turn the heat down to medium low and add in the tomatoes (I chopped mine up a bit after taking this picture), Marsala, balsamic, sugar, and chicken base. 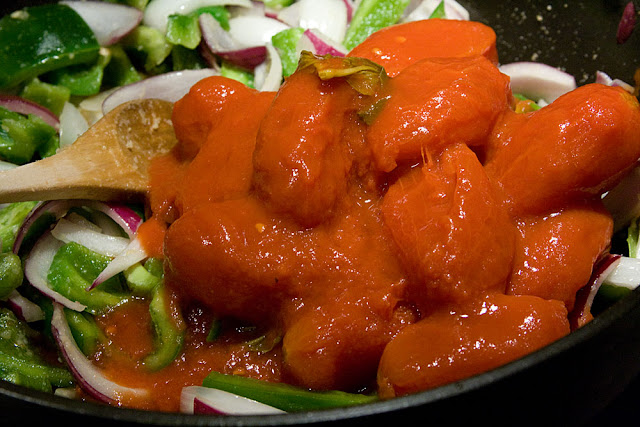 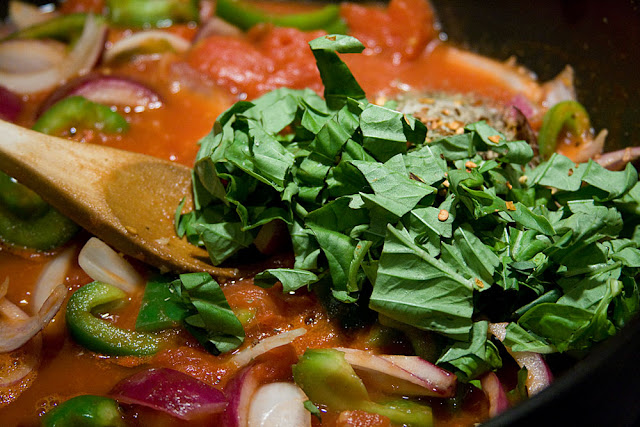 Slice your sausages into thirds and throw them into the mix as well.  Remember how I said you could see the cheese and pepperocini’s inside the sausage?  Well take a look and tell me what you see.  Oh YUM. 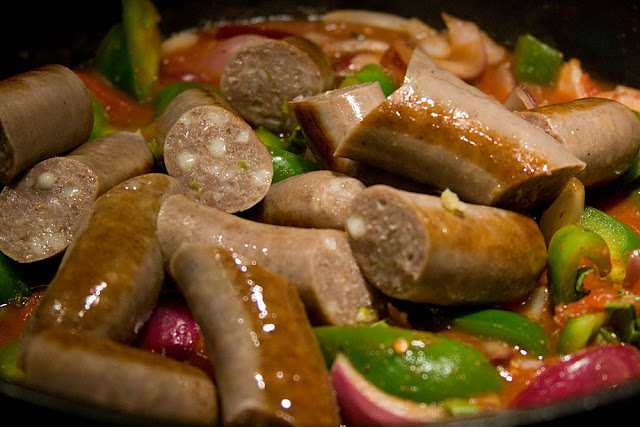 Oh baby, prepare to dig into a hearty meal of sausage, onion and pepper that you won’t be able to resist. I promise. 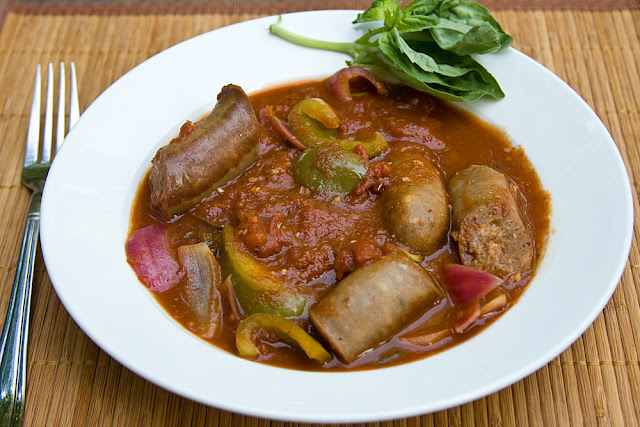 Get Ready for the Pacific Foods Everyday Chef Challenge!