Every time I put together a Mexican dish, I can’t help but think of my Aunt and Uncle living down in Baja Mexico doing exactly what they were meant to be doing.

END_OF_DOCUMENT_TOKEN_TO_BE_REPLACED

A short while back I dropped a truly Southern dish of Stewed Tomatoes and Okra onto the blog.  While chatting up a windstorm about my new fangled Southern self, I mentioned an upcoming Fried Green Tomato recipe.  Well get ready, because Southern cooking has never tasted better than these charmers right here.

Ever since attending the Food Blog Forum Conference back in September where I was served a Fried Green Tomato Slider that officially knocked my Northern rooted socks off, I’ve been wanting to try my hand at the little buggers.  The other day while perusing through the spoils of my local farm stand, I finally stumbled upon the fruit that eluded me up to that point in my paltry culinary life – Green Tomatoes.    I promptly snatched up two of the juicy unripe beauties and brought them home.

I proceeded to post a few options for how to cook them up on my facebook page. I had planned to either emulate the slider I so adored or attempt a fried green tomato BLT.  However, one post caught my eye from a reader who said that she liked her fried green tomatoes with a side of, well, fried green tomatoes.  Plain and simple.  And why not.  These show stoppers really don’t need any dressing up.  They’re perfect just as they are.  Serve them with the suggested sauce, or, if you’re feeling a bit adventurous, slide them between two slices of bread and create your very own Southern sandwich masterpiece.

END_OF_DOCUMENT_TOKEN_TO_BE_REPLACED

Being the native Northern girl that I am, living in the south can sometimes be, well, a little different.  The weather’s a whole bunch hotter, there’s a certain “twang” from the natives and the dishes lend themselves to a completely unique world of flavors from what I grew up with.  My Northern roots are a strong part of who I am, but having now resided in North Carolina for an extended period along with ample time spent in Hilton Head, SC where my parents live, the Southern influences that are such an integral part of the culture here are beginning to waggle their way into my life.  I have recently channeled my inner Southern “Sista” and let me tell ya, I’m liking her a whole lot.   Between this dish today and the upcoming Fried Green tomatoes recipe, I could easily welcome my newly discovered Southern side to the table on a regular basis.

END_OF_DOCUMENT_TOKEN_TO_BE_REPLACED

I know I promised an Indian feast for the next few days, but as luck would have it, I left for vacation and forgot to grab the pictures I needed to make the posts.  Have no fear, they’re safely tucked away on my server back home, but alas, it does me no good right now.  So, I will need to improvise a bit and go with a few recipes I do happen to have on hand.  I promise the Indian food will be back in all it’s glory next week.

I asked Mr. Cheesy Cauliflower Puree to step in at the last minute and he gladly accepted the task.  I’ve been wanting to try and whip a batch of this yumminess up for some time now.  Ever since I saw a plate of it displayed over at a fellow Daring Cooks site, where it instantly made my mouth water.

There’s really not much to it, so let’s put it out there and have ourselves a heaping pile of puree.
…

END_OF_DOCUMENT_TOKEN_TO_BE_REPLACED 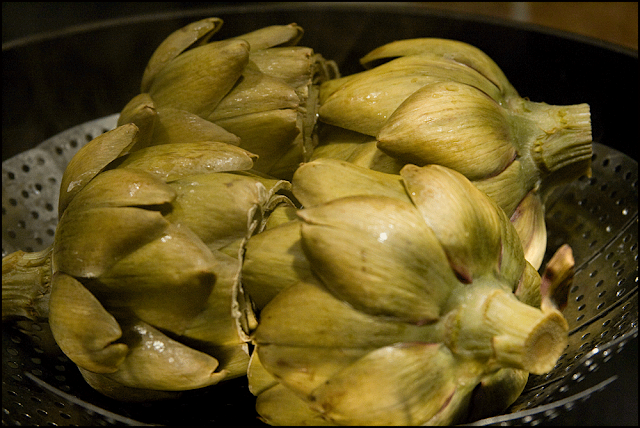